May 21, the World Day for Cultural Diversity, came and went almost unnoticed. A few companies did try and do their bit to promote diversity at the workplace. But the Hilton group has gone to town with a special menu — dedicating not one day or one week but an entire month to cultural diversity at one of its newest properties in Delhi. In keeping with the theme, a carefully selected five-course menu gives guests at Infinity restaurant at the new Mayur Vihar Hilton an opportunity to take a culinary trip across three continents.

The Infinity welcomes guests into an airy and light atmosphere. White walls, pale wood and white marble flooring, and mirrored pillars with delicate motifs come together to provide a pleasing ambience. Windows running along the length of two walls of the high-ceilinged restaurant add freshness.

‘Culinary Flights’, as the special menu is called, begins with Italian delights — an Olive and Tomato Crostini topped with Parmesan Foam, which is rightly called a teaser, followed by the appetiser — Stracci al’ Aragosta. Crostini, which translates into ‘little toast’, is said to have been peasant food in medieval times when bread, which was topped with cheese, meat or veggies, served the function of a plate. This crostini was bright, fresh and simply delightful. The fresh basil set off the zing of the tomatoes, while the black olives just gave it a hint of saltiness and flavour. The appetiser consisted of succulent pieces of lobster poached in wine and lobster broth, covered in lasagne sheets, topped with blanched spinach leaves and saffron reduction.

The two dishes were complemented by an Italian white wine — Carpene Malvolti Prosecco Brut. Setting aside a personal bias towards white wine, this Italian sparkling wine floored me. It naughtily played on the palate, while its freshness and lightness gave the appetisers a gentle kick.

In a not-too-old Hindi film, the protagonist compares food with artistic masterpieces, namely paintings, and deduces that food is the higher form of art because it draws every sense towards itself. The Creamed French Onion Soup with Poached Scallops looked simply elegant. Fresh thyme and a few drops of olive oil added colour to the ever-so-pale pink soup. However, the scallops and the creamy aroma was enough to distract any foodie. The tender, succulent scallops added a beautiful flavour to the rich soup, which, despite its creaminess, was surprisingly light on both the palate and the stomach.

The soup was complemented by a French white wine from the famous Burgundy region, Domaine Laroche Petit Chablis, served at room temperature so as to not shock and confuse the body — more specifically the stomach. 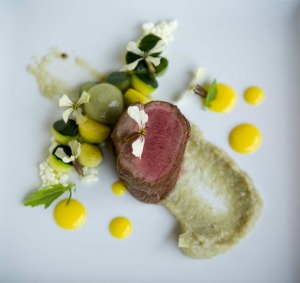 Fresh and hearty, sweet and salty, the main course — Roasted Australian Lamb Loin with Crash-hot Potatoes, Apple Confit and Fried Goat Cheese — was characteristically Australian. So, how many times have you heard Michelin star chefs rave about that perfectly pink lamb? There really is a reason behind it — it makes the lamb flavourful, juicy and tender. This dish really packed a punch with its variety of flavours and textures! The salt and pepper-coated crust of the lamb complemented the juicy centre; the meaty taste blended with the pungent flavour of the cheese fried in crumbs to give it crunch, which combined with the versatile boiled and roasted baby potatoes.

And all of this was balanced with the sweetness of the apple confit and Australian red wine — D’Arenberg Footbolt Shiraz.

Surprise of all surprises, the dessert, too, was served with white wine — the Indian Sula Late Harvest Chanin Blanc.

Sous Chef Mayur Thapa said their combined global experiences have been pooled to make the dishes innovative. “They aren’t traditional. We have added fusion elements to the dishes. For example the traditional French onion soup is a clear soup,” he said.

However, though the menu can take one on a gastronomically delightful journey, it does not do justice to the huge population of vegetarians in India.

Chef Thapa said this menu gets more attention from international tourists while Indians tend to give it a miss! Do we need to get a little more adventurous?

2 responses to “A lip-smacking world tour”